Each month, the FEC sends the principal campaign committee of Bernie Sanders a heads up. Officially, it’s called a Request for Additional Information (RFAI). This notice points out problems in the campaign fund-raising. The hard-working team at the FEC scour the contributors for excess donations and foreign addresses, look at cash receipts and disbursements, check arithmetic and in general, make sure the treasurer of Bernie 2016 is following regulations.

Once again, Bernie 2016 has problems. This time, there are a lot of problems – 270 pages of problems. Bernie’s money machine can’t seem to get it right. If anything, the responsible committee is getting worse at its accounting, worse at its disclosures, worse at its arithmetic, and much worse at accepting donations far exceeding the $2700 limit for the primary.

While Bernie Sanders keeps on with the boast of $27 donations, the money trail in the FEC reports shows this is a misrepresentation.

Donors like those shown below are stuffing Bernie 2016 with donations that range from $100 to $770 per hit  – and getting flagged by the FEC for topping the $2700 limit. This is just one page from the newest report. There are many more pages of excessive contributions.

Bernie 2016 surely has some kind of mechanism in place to track and total individual donations, right? It is the Principal Campaign Committee of a Presidential candidate. It does have a Treasurer. It is responsible for legally managing millions of dollars.

And as for those $27 donations, perhaps Sanders is referencing the individual below who donated 24 times in a single day. Again, this is a single example of many such practices. 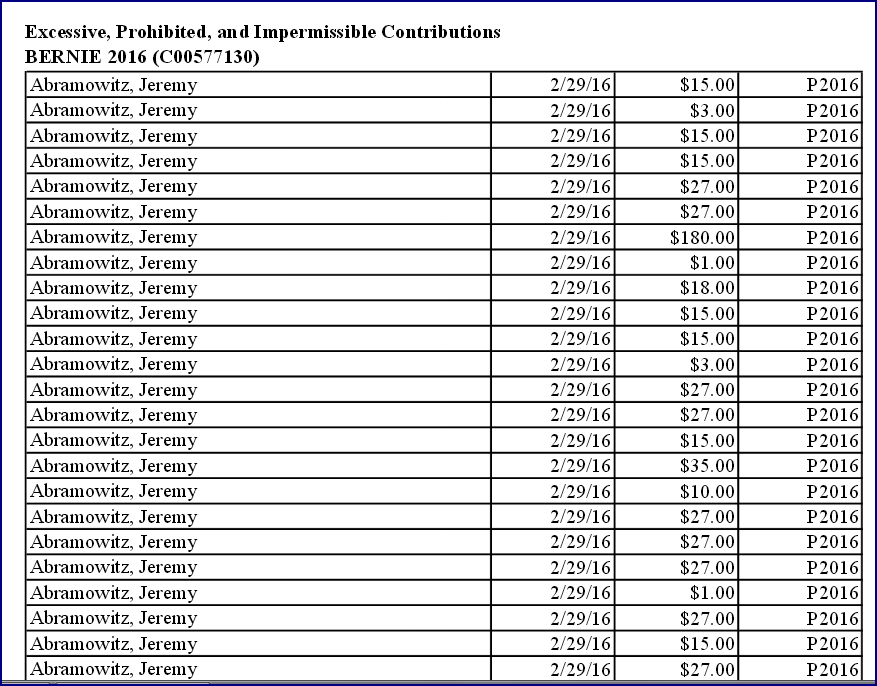 Why can’t Bernie’s campaign manage money? Why does it allow, month after month, excessive campaign donations?  Those are not meant as rhetorical questions. Here’s a candidate that built his platform on the evils of Big Money. Yet Bernie Sanders is rolling in the dough.

The socialist’s campaign is running with the pack, coming in number two in Total Receipts, and collecting more money than all three GOP candidates combined. Hillary Clinton is at the top but she is doing battle against Sanders, the GOP and untold amounts of dark money.

The Sanders campaign is also a Big Spender (see above chart). As February came to a close, it had gobbled up a huge chunk of its donations. And it kept up this pace. According to its March Monthly Report, Bernie 2016 received $43,498,784 and disbursed all but $2,549,685.

Meanwhile, the candidate left the campaign trail with his family and friends for a non-political conference in Vatican City, flying in a half-empty chartered jet and amassing debt that his campaign manager states will be absorbed by the campaign committee – but that’s another story.

None of this frenetic taking-and-spending resembles austerity. It is very much akin to the culture of greed that Sanders constantly condemns.

It’s time for Bernie Sanders to put his mouth where the money is and admit the truth – he loves that green stuff.

17 February – Bernie Gets $10Million in Mystery Donations from Washington DC