Hostility is alive and kicking in the Bernie Sanders campaign. It is no aberration or random strain.

The antipathy toward all that represents the Democratic Party – its front-runner Hillary Clinton, elected officials and public figures who endorse her, and the rank-and-file party members who support her – is at the core of the Bernie Sanders campaign. It is a message delivered most forcibly by his surrogates but make no mistake, the candidate approves of this message.

Fury at the Democratic Party is not a new element of the Sanders candidacy. This open nastiness is months in the making. But it took the New York primary to blast it onto the psyche of the non-attentive public.

Back in February when Hillary Clinton won the Iowa primary and posted a humble Thank You tweet, she was attacked with an onslaught of replies that condemned and mocked her in the most unfriendly manner. This derision toward Clinton was noticed at Sanders’ rallies as well where the mention of her name was like raising a cue card that commanded his followers to boo derisively.

Dr. Paul Song exemplified the hate with his “Democratic corporate whores” remark at New York’s Washington Square. With that and with the world attending to the make-or-break New York primary, the media opened its droopy eyes and took note. The networks solemnly reported on the name-calling and were happy to air the day-after apology by Bernie Sanders. Clinton’s twin standard bearers – Krugman and Daou – pronounced the slur over-the-line.

Pulitzer Prize-winning economist Paul Krugman took to the New York Times and labeled Song’s comment and the cheers that followed a signal of “intolerance.”

When you see Sanders supporters going over the top about “corporate whores” and such, you’re not seeing a mysterious intrusion of bad behavior into an idealistic movement; you’re seeing the intolerance that was always just under the surface of the movement, right from the start.

Over at Blue Nation Review, Peter Daou charged the Sanders camp with “Hillary-bashing” and running a toxic campaign.

Even in the heat of a primary, there are limits to what candidates and their surrogates should say. The Sanders campaign is increasingly willing to cross that line. It’s good that they’ve tried to walk this incident back, but more should be done in the face of the constant verbal savaging of Hillary and her supporters, including vicious attacks on legendary activists like Dolores Huerta, John Lewis and Tom Hayden.

A column at Slate called the term a demeaning “sexist slur” and included the tweet below.

@paulysong I am a physician and I am ashamed of you. That rally was a misogyny filled hate fest. #ImWithHer pic.twitter.com/MoPs031ula

When the New York primary results were final, the glossy New York magazine cut deeper into the heart of the Sanders campaign. Jonathan Chait relegated Bernie Sanders to a misguided super hero fighting the supposed forces of evil.

Sanders’s denunciations of the primary system as rigged have merged with his descriptions of the economy and the political system as rigged. In combination with his attacks on Clinton for succoring Wall Street — which are exaggerated but not entirely imagined — Sanders has conjoined Clinton and the Democratic Party apparatus to the shadow nexus of villains that he and his revolution are pledged to overthrow.

While establishment media wagged a disapproving finger at the “corporate whores” label, others weren’t dismayed.

The Young Turks, long a Sanders’ echo chamber, protested the media coverage of Song’s nasty remark and condemned the lack of reporting on the Washington Square rally. To them, crowd size was a more important thing than Paul Song’s slander. Its unabashed enthusiasm for his slur is a thing to witness – but only if the viewer considers “Democratic corporate whores” fair play in the presidential election.

In fact, war has been declared by elements in the Sanders’ ranks. Song’s distasteful name-calling is a mild version of attack for these soldiers. To understand where all this antipathy comes from, take a look at Revolt Against Plutocracy (RAP), an enclave that generated the Bernie-or-Bust pledge. The group has been in existence for months. In the snippet below, RAP refers to its army as “democracy commandos.”

This declaration of hostilities is not something you’ll hear out of the mouth of Bernie Sanders. He has maintained distance, the separation required for plausible deniability. The anarchist group actually details the necessity of separating themselves from their candidate.

According to RAP’s mission statement, its job is to organize and recruit for the revolution. It exists in a parallel universe with the Sanders campaign; an odd symbiotic connection that condemns electoral politics while being fueled by the electoral run of Sanders. It goes so far as to call it “his revolution,” giving Sanders ownership while disavowing his involvement.

The presidential run of Sen. Bernie Sanders is no longer a campaign of issues. It never has been. It is definitely not “politics as usual.” It is a facade that hosts a revolution.

If Democrats are wringing their hands and wondering why he won’t suspend, they need to comprehend this fact.

If Democrats are up in arms because civil discourse is one-sided and intolerance reigns, they do not understand the nature of the Sanders’ campaign.

Democrats who believe appeals to reason will persuade these folks to come over to the Clinton camp are not seeing the hostile divide. If we take RAP at its word, the split between them and the Democratic Party is impassable.

This combative revolution goes beyond ditto heads with their cyber assaults. Take for example the “Watch List” of Hillary Clinton supporters. Compiled by an unknown person or persons, it lists Twitter accounts of Hillary Democrats and declares a virtual surveillance on these people. Questioning this tactic resulted in the following missive:

The message below, also from RAP, declares a “hostile coup” against Hillary Clinton and the Democratic party leaders. Thus, we see icons like Rep. Debbie Wasserman Schultz, Rep. John Lewis, Sen. Elizabeth Warren, Peter Daou, Howard Dean and former President Bill Clinton all fall under the sickle of the revolution. 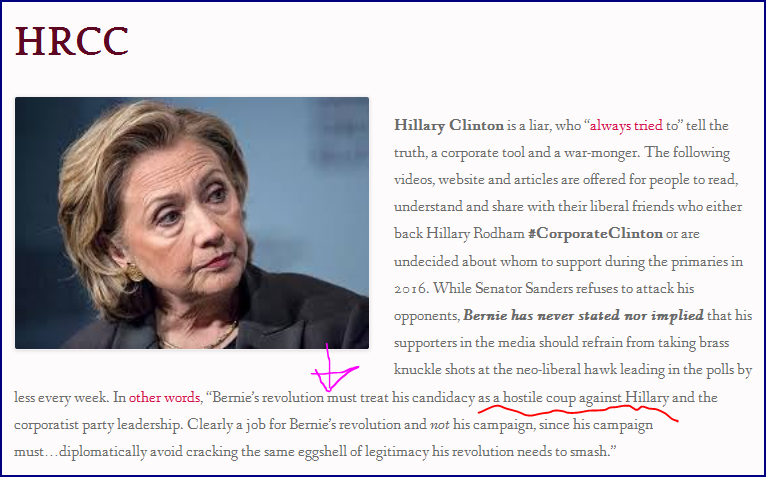 Likewise, entities that endorse Clinton (the “enemy”) are fair game and subject to attack. The list here is long but includes Planned Parenthood, the League of Conservation Voters, and the Human Rights Campaign.

There is chilling reference to “purges” – a remark that resurrects images of Josef Stalin and Mao Zedong, dictators who cleansed the unbelievers in bloody purges.

Last but not least, the revolution has recruited soldiers from other countries. They are known to the FEC for illegally funding the Sanders campaign. They also work directly in the campaign.

The revolution has an unknown number of soldiers. Yet in true Alinsky-style, it is the threat of overwhelming force that frightens.

The bigger question in this revolution/election is the disposition of its leader/non-leader. Will Bernie Sanders continue his war campaign or will he surrender?

He has moved further in sync with the anarchists and distanced himself from the SOP of electoral politics. His loss in New York was the signal to retreat, to suspend his operation and withdraw from the race. Yet, he shows no sign of following this gentlemanly code.

As Democrats await another string of state primaries, we must recognize that Bernie Sanders has nothing to lose if he continues his war campaign.  And regardless of his decision – to suspend or to stay – the revolution will not disappear. Our Democratic party leaders will face anarchy from within long after this election concludes. The revolution will not go quietly into the night. But revolution is not always a bad thing. We’ve seen it before and we have survived. It is war that destroys.

Click HERE for an index of campaign finance issues with the 2016 Bernie Sanders campaign.