The call for party unity by GOP National Committee chair Reince Priebus was met with immediate anger by party faithfuls. One after another, they repeated their commitment to prevent his nomination with many abandoning the party.

The splintering of the GOP is now underway.

RedState, a conservative blog, wrote about an upsurge in Libertarian party sign-ups. According to its 4 May article, the numbers were negligible but the movement is underway. Gary Johnson, the former governor of New Mexico, is running on the Libertarian ticket. (Rand Paul must be grinding his teeth.)

But the article’s summary encapsulates the strong antipathy to Trump among this branch of the GOP:

Meanwhile social media is resounding with anger as the #NeverTrump and #NeverEverTrump hashtags multiply.

So we understand why the #GOP died, it just nominated a mentally unstable #GameShowHost to be #POTUS#NeverEverTrump pic.twitter.com/8ZzaDhci60

The entire timeline of WTFNews is dominated with similar tweets.

Hillary Clinton’s campaign smartly anticipated the GOP reaction to Trump as its nominee with the release of a savvy video. Titled, “I am a unifier,” it is populated by GOP figures denouncing the candidate. There’s Mitt Romney, Marco Rubio, Jeb Bush, Lindsey Graham and Ted Cruz – but Hillary Clinton makes no appearance. There was no need.

In sync with the video was the new appearance of Clinton’s “Republicans for Hillary” welcome to the disenchanted. 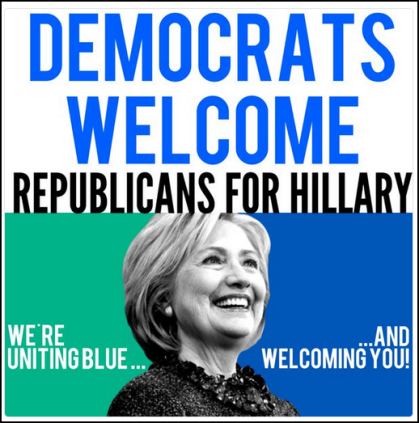 And, Republicans are coming over to the Democrats, as evidenced by these tweets.

@wtfnewsamerica @Seaturtle918 Better Hillary than Trump. It’s not an easy thing to say, but it is getting easier . . .

@Reince @realDonaldTrump @GOP @HillaryClinton I am a life-long Republican. I will vote 4 a democrat for the first time in my life over Trump

If it’s close, this will be first time I vote Democrat for President. Is there a pledge pin, or a secret handshake, or what? #NeverTrump

Not I, Reince. I’m a loyal Republican but I will vote for a democrat for the first time. Hope you guys are satisfied https://t.co/ekcJK8aSym
— Christian Amy (@TheChristianAmy) May 4, 2016

@NishWeiseth So many of us conservatives will be voting democrat for the first time ever.

The Washington Post got in on the #NeverTrump action with an article by Ilya Somin titled, “Don’t Give Up the Fight Against Trump,” describing how he might be eliminated through rule changes at the GOP Convention. The author suggested a new rule “banning consideration of candidates who resort to threats of violence or condone violence by their supporters.”

And today, Paul Ryan, House Speaker and the one Republican who might heal the party, distanced himself from Trump.  “I’m just not ready to do that at this point. I’m not there right now,” said Ryan when asked about endorsing Trump. “I think what a lot of Republicans want to see is that we have a standard bearer that bears our standards.”

I’m bleary-eyed. After nearly a year of political rhetoric, I can’t tell a Bernie supporter from a Trump supporter or an all-American patriot from a #NeverEverTrump-er. But what I know for sure is that Trump is roundly despised. The few who threaten to support him are the fervent few of the Bernie-or-Bust movement and Republican officials taking a calculated risk.

Six months remain until the General Election. No one can foretell what will happen next.