If there’s one area where Donald Trump is a proven flop, it’s as a writer.

In 24 years, Trump has authored 14 books. Each one is titled to attract wannabe millionaires with single focus themes and simplistic titles like How to Get Rich and Think Like A Billionaire and Think Big and Kick Ass. The subjects sound a lot like those middle-of-the-night TV shows featuring fast talking con men who promise instant wealth if only the viewer buy his book and follow his simple steps. Trump’s books, like those shows, have the same allure and target the same audience: woeful mid-lifers who think all they need is a scheme and a mantra and millionaire status will be theirs. 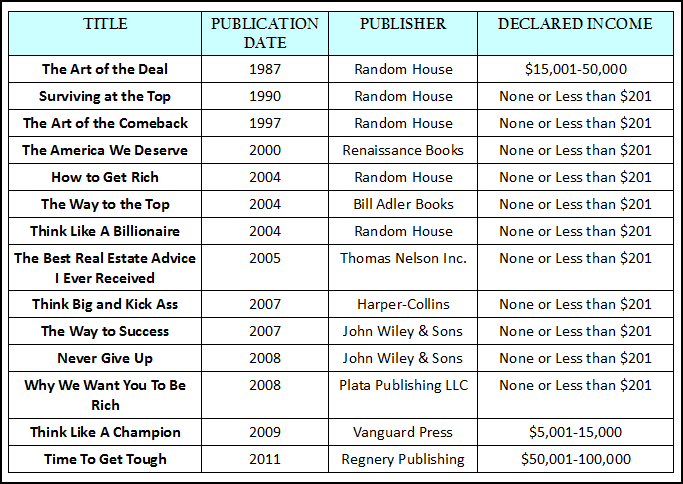 According to Trump’s required disclosure as a Presidential candidate, his get-rich books are get-real failures. Only three of the 14 have garnered enough royalties to report, and according to his records, their aggregate sales have ranged between $70,000 to $165,000. While these figures look impressive to almost any book author in the U.S., the sales are likely connected with Trump’s name recognition rather than the substance of his writing. With the exception of his first book written in 1987 (The Art of the Deal), it took 22 years and a dozen efforts before his sales tipped the $5000 mark, and this coincided with a nasty – and much publicized – divorce. And as recently reported, Trump worked overtime to garner that publicity with his two phone-in personas.

Trump used nine different publishers in his quest for fame as an author, likely believing the publishing house somehow thwarted his take-over America written brilliance. To be fair, he did use Random House with five of his 14 titles but it’s equally possible he was snared in a contract with the publisher and had no choice.

With his entry into the 2016 election and status as the presumed GOP nominee, Trump has finally learned his lesson. The people who love him do not read.