13 September 2016. A non-profit legal watchdog group, the Citizens for Responsibility and Ethics in Washington (CREW), filed a complaint asking for an investigation into potential bribery against GOP Presidential nominee Donald Trump, the Trump Foundation and Florida’s Attorney General Pam Bondi.

The complaint was lodged with Christopher Canova, the acting Attorney General for Florida’s Northern District. It details what the organization describes as “a federal crime relating to an apparent bribe solicited by the Florida Attorney General and paid by Trump and the Trump Foundation.” 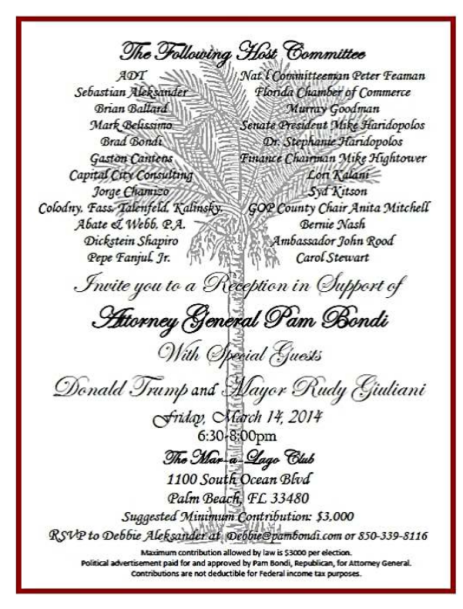 The allegations surround an investigation into Trump University by the Florida AG in 2013 following complaints by the state’s residents. That investigation was dropped after Bondi received a $25,000 “donation” to her reelection campaign by the Trump Foundation. Bondi “personally solicited” the donation.

Subsequently, Trump appeared at a fundraiser for Bondi held at Mar-A-Lago, his Palm Beach mansion. Bondi was charged well less than the market rate for its rental. According to one source, rental fees for the mansion run as high as $140,000. Her fee was less than $5000 and was paid by the Republican Party of Florida.

In addition to the large donation to Bondi and the reduced rental charge, Trump’s daughter Ivanka also donated to Bondi’s campaign.

Former NYC mayor and Trump campaign surrogate Rudy Giuliani was listed as a “special guest” at the $3000-a-plate fundraiser.

CREW also calls for an immediate investigation by the Department of Justice for “numerous false reports” by the Trump Foundation to the IRS.

Coinciding with the CREW complaint, the Democratic Coalition Against Trump filed a complaint with the Public Corruption arm of the FBI and the US Department of Justice, alleging illegal contributions by the Trump family to Bondi. This complaint itemized $635,000 in money directed to Bondi’s campaign coffers either directly or via the state’s Republican Party.

The complaints against Bondi and Trump follow a number of news stories at the national and state level. In addition to reports by the Washington Post, the Miami Herald, Orlando Sun Sentinel and Tampa Bay Times each called for an investigation after news broke that Trump paid a fine to IRS for the Bondi donation. The confirmation of an IRS penalty gave impetus to the allegations of bribery.

CREW’s complaint details how the Trump Foundation admitted to violations of the tax code several years before its founder announced a run for the Presidency.