One of the more puzzling questions in this political universe of odd affairs has to do with what’s called the Steele Dossier and when US officials knew about its existence.

This packet of information from Christopher Steele, a former spy with Britain’s MI6 agency, contains 35 pages of data gleaned from his Russian sources over a six month period extending from June through December 2016.

The dossier is the key to #RussiaGate and all that term encompasses. Its many allegations – some confirmed and others under investigation – trace a connection between Donald Trump and key players in his campaign and Russian actors. It records alleged attempts by the Russian state to deliberately harm the presidential bid of former Secretary of State Hillary Clinton. According to Steele’s sources, the black op was coordinated, paid and enacted by the Kremlin and Trump campaign staff.

As it turns out, Steele forwarded the dossier to an unidentified FBI contact shortly after he began collecting information. By August 2016, Democratic party leaders in the U.S. House and Senate began disseminating the substance of the dossier via letters and public statements. Members of the press began reporting with Mother Jones breaking the story a week before the General Election.

By mid-September 2016, Russian president Putin recognized the negative consequences and began the first steps toward covering up the operation. He ordered silence about the operation, sacked one of his advisers involved in the negative op and removed a Russian diplomat from D.C. as a safeguard (Steele dossier, 2016/111).

Former Secretary of State and Democratic presidential nominee Hillary Clinton was aware of the allegations against Trump and Putin by October 19, the night of the final Presidential Debate. More than likely, she had been briefed about the operation many months before.

In hindsight, it looks as if the U.S. intelligence community, portions of Congress, the White House, both presidential campaigns and the media were knowledgeable about this unprecedented attack on the electoral process months before the election. Trump and his campaign delivered a unified dismissal, calling the allegations “fake news” and “ridiculous” while railing at “liberal media” and casting doubt on the country’s intelligence agencies.

The “Who Knew What When” question takes a backseat to the treasonous allegations contained within the memos. And yet, its significance rivals the idea of treason in high places. For we are left to wonder why our intelligence agencies chose to keep the contents in the shadows until independent media broke the story. We have to ask why the leaders of the Republican Party endorsed this individual knowing that he took office with an active counter intelligence investigation open.

Those are background questions. But their importance is crucial to a continuing democratic republic.

WHO KNEW AND WHEN

FBI contact in Rome – According to an article in Vanity Fair, Steele delivered his first two missives in August 2016 to an unidentified member of the FBI’s Eurasian Joint Organized Crime Squad in Rome; the “unidentified” FBI contact named in the Mother Jones article written by David Corn.

David Corn (Mother Jones) – In October, Steele traveled to New York City and met with David Corn, the Washington bureau chief for Mother Jones magazine. Corn promised to keep Steele’s identity masked and Steele revealed his dossier to him in an interview. On October 31, 2016, Corn broke the story of the dossier, protecting the identity of Steele but quoting directly from his meeting and the assembled Steele memos. The veteran journalist included these remarks in his article:

The former intelligence officer says the response from the FBI was “shock and horror.” The FBI, after receiving the first memo, did not immediately request additional material, according to the former intelligence officer and his American associates. Yet in August, they say, the FBI asked him for all information in his possession and for him to explain how the material had been gathered and to identify his sources. The former spy forwarded to the bureau several memos—some of which referred to members of Trump’s inner circle. After that point, he continued to share information with the FBI. “It’s quite clear there was or is a pretty substantial inquiry going on,” he says.

FBI Director James Comey – Sometime in the summer of 2016.

President Barack Obama – Likely in the summer of 2016.

On December 29, 2016, the Obama Administration issued its official Response to Russia, citing previous “private and public warnings to the Russian government” and detailing sanctions, office closures and other actions taken against Russian officials.

Obama concluded: “These actions are not the sum total of our response to Russia’s aggressive activities. We will continue to take a variety of actions at a time and place of our choosing, some of which will not be publicized.” 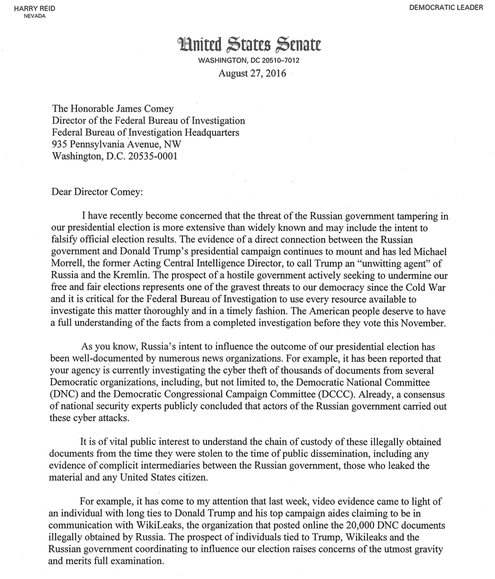 Democratic members of the House Intelligence Committee – At least as early as August 2016 as documented in their letter to James Comey.

Democratic members of the Senate Intelligence Committee – Prior to September 2016 as documented in a joint statement released by Senator Dianne Feinstein and Rep. Adam Schiff.

“Based on briefings we have received, we have concluded that the Russian intelligence agencies are making a serious and concerted effort to influence the U.S. election. At the least, this effort is intended to sow doubt about the security of our election and may well be intended to influence the outcomes of the election.” –Members of the Senate and House Intelligence Committees

Hillary Clinton, Democratic Presidential nominee – Clinton undoubtedly knew about the allegations in the dossier by mid-October and likely much earlier through briefings.

James Clapper, head of the CIA – Clapper formally announced his agency’s conclusion that Russia actively interfered in the election with the aim of tilting it toward Trump in early December 2016, a month after the election.

Senator John McCain (R-AZ) – McCain forwarded the entire dossier to Comey on December 9, 2016. By then, the FBI and CIA were in possession of Steele’s dossier and had already confirmed Russia’s interference.