When the North Korean ICBM splashed down into the Sea of Japan on 28 July it wasn’t alone. A U.S. guided missile destroyer was sailing in the same waters, accompanied by two Japanese warships.

As seen in the tweet above, the USS Mustin (DD 89), an Arleigh-Burke class warship with offensive and defensive capabilities, was on anti-submarine manuevers with the JS Takanami, and JS Onami, two Japanese destroyers capable of anti-submarine (ASW) and anti-surface warfare (ASuW).

Undoubtedly, the group of destroyers tracked the path of the North Korean Hwasong-14 missile during its nearly hour-long flight. According to KCNA, a North Korean news outlet, the missile “reached an altitude of 3,725 kilometres and flew 998 kilometres for 47 minutes and 12 seconds before landing in the waters off the Korean Peninsula’s east coast.” 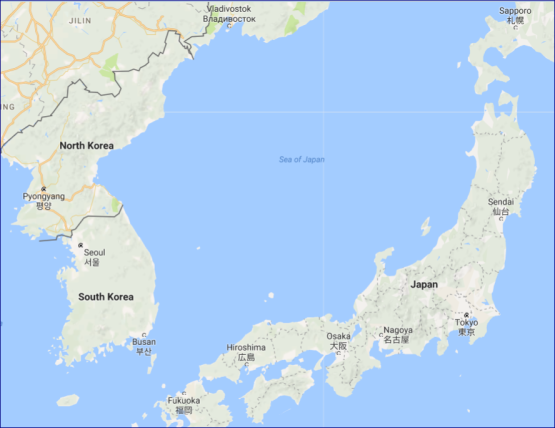 David Wright, a physicist with the Union of Concerned Scientists, wrote that the missile achieved an altitude of nearly 2300 feet and its ground range was 600 miles. According to Wright, the splashdown would have been near Japan’s territorial waters.

The exact location of the Mustin and its Japanese counterparts is unknown. However, it is clear they were within range of the missile.

There is no report from US military sources on what, if any, action was taken by the destroyer group. Their lack of defensive action might indicate knowledge that the ICBM was unarmed. The other options would be alarming.

All ships are presumably armed and at the ready for aggression by Kim Jong-un. How did this ICBM slip through the net?