You’ll know them by their name: Baronoff, Rybolovlev, Millian. You’ll find them in cafes with the obligatory samovar, clustered in luxury condos dotting the favored southeast coast overlooking the Atlantic, in giant structures carrying the Trump brand. There are the pregnant Russian women who come by the planeload, according to The Miami Herald, to give birth to naturalized American babies.

In 2012, CNBC was reporting that South Florida’s new moniker was the “Russian Riviera.” Even the Census reported a surge in Russian immigrants to Florida. In 2002, the number was 200,000. Now, some estimate that figure is closer to half a million – in South Florida alone. And a quick visit to YouTube shows a string of Russian-language videos filming the sights of Sunny Isles and Hallendale, lures for the folks back home.

But mostly, it’s Russian money – millions of rubles making their way from the frigid climes of Russia to the balmy shores of Florida.

Nuggets of Florida-Russia connections can also be unearthed in the sworn testimony of Glenn Simpson, co-founder of Fusion GPS and former Wall Street Journal writer. Simpson’s hours-long Q & A session was delivered to members of the U.S. House Intelligence Committee and released to the world on January 18 of this year.*

When it comes to Florida, the talk is convoluted for most folks. It’s a primer on real estate schemes for debt-ridden people like Donald Trump and cash-rich moguls with a Russian address.

Simpson describes how various “alternative financing” schemes allowed Trump to obtain financing for his pricey South Florida developments. It was a scheme repeated in New York, Panama and Toronto. The efforts succeeded at times. In other cases, a financing deal would fall through or defrauded buyers would sue.

The one constant: Russian money and Russian “buyers” were involved.

Here’s Simpson explaining how one of these “alternative financing” schemes worked to sway financial institutions and buyers for Trump’s luxury units. Using his vaunted brand name as a lure, Trump would assure the lender that lots of Russian buyers were at the ready. Or he’d set up a licensing agreement for the Trump name to add honey to a financing deal.

From page 96 of the transcript: 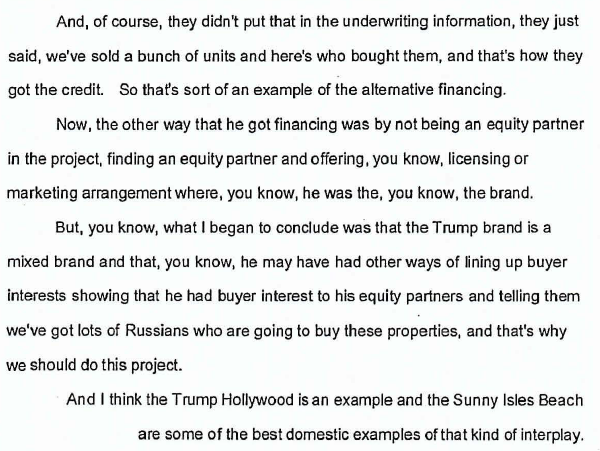 In this question-and-answer between Simpson and Rep. Adam Schiff, the criminality is exposed when Russian buyers turn out to be fronts (page 97): 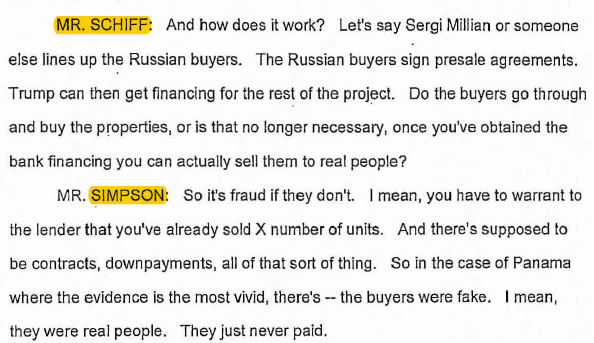 Simpson has been digging into the Russian mob for years. His knowledge of questionable transactions involving Trump and his family is not limited to the research he did during the presidential campaign. It’s not data offered up by his MI6 source either. Rip-offs have been exposed in court papers where angry buyers sue over buildings with near empty tenants. Here’s more from Simpson (page 98):

This illicit Russia-Florida money exchange was evident in other transactions. Simpson talks about an episode with Donald Trump and a Russian billionaire named Dmitry Rybolovlev.

Trump bought a “derelict estate” in Florida for $41 million. He made a few modest renovations and then sold the property to Rybolovlev for a whopping $95 million. That kind of jaw dropping markup attracts attention. Rybolovlev tore down the mansion, subdivided the property into three lots and put them on the market. He has yet to recoup his initial purchase price. He virtually gave Trump a $50 million gift.

Rybolovlev throws away millions in classic art as well. Last year, he sold five paintings in a Christie auction for a loss of $150 million. Alternative financing – it’s a nice term for money laundering.

Simpson framed Trump’s relationship with Rybolovlev as “the first trimester of the Trump-Russia relationship” and ties him with another known name among oligarchs: Igor Sechin, head of oil giant Rosneft and second only to Putin in power.

Big hitters. Big money. The bottom line according to Simpson’s research – Trump has a friend in the Russians who need to push money around and dump millions at the drop of a hat. It’s a win-win. Trump gets his branded condos all over South Florida and the Russians wash dirty money.

There is one more aspect to the South Florida money pit – sanctions. Leveled against named Russian oligarchs, their coterie and Russian entities, these prevent their funds from being deposited across the world. There are the offshore accounts but even these have their limitations. Imagine having a suitcase of cash (as attributed to Paul Manafort) and needing a receptacle for dumping it. Why not buy a Trump condo or two or three? That’s a million. Why not act as the lending agent for Trump developments? There’s a bunch of millions. The outcome is a yuge win – the man who is president of the United States is indebted to his Russian lenders.

In the midst of all this activity is the steady influx of immigrants from various Russian countries. Certainly many are fine people. They buy into Trump’s posh condos, open businesses catering to other emigres, indulge themselves in all the luxury of the Russian Riviera and wave as Trump’s motorcade heads to the Winter White House. Life is comfortable and familiar.