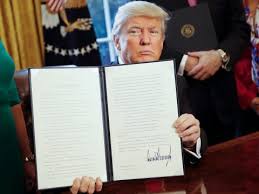 A little publicized Executive Order signed by Donald Trump almost a year ago may become his weapon of choice in thwarting the Trump-Putin investigation and the work of Special Counsel Bob Mueller.

Signed on 31 March 2016, Executive Order 13787 provides for a line of succession within the Justice Department.

The one-page document looks like an insignificant administrative process. It designates how officers – starting with the Attorney General through an Acting Attorney General – will be replaced, aka the order of succession. However, the section on Exceptions might raise eyebrows. Here, in innocuous detail is the following caveat:

(c) Notwithstanding the provisions of this order, the President retains discretion, to the extent permitted by law, to depart from this order in designating an acting Attorney General. |Emphasis added|

Keep in mind that Trump used his executive power to replace Acting Attorney General Sally Yates. He did this with Executive Order 13775, signed on 9 February 2016.

Bob Mueller is a direct threat. Yet, if Trump dared a repeat of the Saturday Night Massacre, this could mark his death knell. Directly ordering Mueller’s removal might spark orders of impeachment for obstruction of justice in the GOP-controlled Congress. At the least, such an abuse of power would motivate millions of Americans to take to the streets in loud protest.

However, Trump could use Executive Order 13787 as an indirect method of stalling or defanging the Special Counsel’s investigation while averting impeachment.

How It Would Work

Trump is beset by a trio of Justice Department officers whom he sees as threats to his presidency.

Topping the list is Special Counsel Bob Mueller, the unwavering investigator digging deep into the Trump campaign ties with Russia. Mueller recently issued subpoenas to Deutsche Bank, an apparent violation of Trump’s red line should his personal financial records be included in those subpoenas.

Attorney General Jeff Sessions, who has publicly and privately enraged Trump for months is a second target. After Sessions’ recused himself from the Russia investigation, a blatant act of disloyalty to this mafioso style president, he appointed Rob Rosenstein as overseer of the Mueller probe, further incensing Trump and placing him in jeopardy.

Target number three is Mueller’s boss, Deputy Attorney General Rob Rosenstein, who controls the fate of the Special Counsel. For this reason alone, Trump identifies him as a threat. Add to that reality Rosenstein’s declaration that he finds no good cause to fire Mueller.

Trump could immediately put the brakes on the Special Counsel investigation by removing the Attorney General (Sessions) and appointing an Acting Attorney General through the Executive Order.

This temporary replacement must be someone with no involvement in Trump’s campaign and must be a Trump loyalist.

With a fresh Trump loyalist in place as Acting Attorney General, the status of Bob Mueller is in serious jeopardy.

Of course, the GOP-controlled Senate must confirm a permanent AG nominee. However, during this period, Trump’s hand-picked Acting Attorney General could destroy the current investigation.

Next action: Remove Mueller and replace him with someone less ambitious in unraveling the Trump-Putin conspiracy.

It would become just a matter of time for the investigation to take on water and drown in a sea of neglect.

Executive Order 13787 could well be Trump’s ace in the hole.