The trial of Donald Trump’s former campaign manager, Paul Manafort, is set to start July 31. In preparation, the Witness List for the prosecution has been released. It includes 35 names, including five who are testifying under a form of immunity. There are a few familiar monikers and many who are unrecognizable to the general public.

According to a report first filed by Politico, Mueller’s team will call witnesses from the FBI, IRS and the Treasury Department’s Financial Crimes Enforcement Network.

Here is a quick rundown of the witnesses with links to additional info where available.

AYLIFF, PHILIP: a CPA with Kositzka, Wicks and Company (KWC), based in Alexandria VA, Manafort’s accounting firm. In testimony, he states that Manafort never revealed his offshore bank accounts, as required by IRS. Ayliff testified on Day 3 of the trial and is scheduled to resume testimony on Day 4.

BRENNAN, JAMES: possibly the director of StoneCastle Partners LLC, a Foreign Limited Liability Company filed in the State of New York in 2003. Included in the government’s evidence list as a name on several email chains. TPM suggests that Brennan may be the vice president commercial and construction loan manager at the Federal Savings Bank. One of the five witnesses granted immunity. More here.

DeLUCA, DOUGLAS: A contractor who did work on Andrea Manafort’s home and was paid over $100K by Paul Manafort through two of his overseas accounts. Andrea is Manafort’s daughter, who was involved in various real estate deals with her father and spouse at the time, Jeffrey Yohai. Appears connected with Vendor M on the indictment. DeLuca testified on Day 2 of the trial.

DEVINE, TAD: former senior campaign strategist for Bernie Sanders; former partner of Manafort; contracted by the Russian-backed Ukrainian president Viktor Yanukovych in 2006 and 2010. Devine’s name appears 16 times in the Manafort trial exhibits. Devine was the first witness for the prosecution, detailing their work in Ukraine. More here, here and here.

Click to view the Superseding Indictment against Manafort and Kilimnik

DUGGAN, DONNA: Identity unclear. Included on the government evidence and reportedly associated with insurance for Manafort’s Brooklyn brownstone. One of the five witnesses granted immunity. More here and here.

EVENSON, DARIN: a Wharton grad, former Naval officer and supervisor with Airnb, a global accommodations agency. Manafort is accused of illegally renting out his SoHo condo on Airbnb and then taking advantage of the tax returns.

GATES, RICHARD: former Trump campaign aide and Manafort business partner who pleaded guilty to conspiracy against the United States and is a cooperating witness in the Mueller investigation. Charged in the original indictment dated 27 October 2017. More here, here, and here.

HOLLAND, WAYNE: Manafort’s former real estate agent, Holland is a Realtor located in Alexandria, VA and neighbor to Manafort. He sold a home to Manafort’s daughter Andrea in Arlington, Virginia. He also helped in the purchase of a 2,779 square foot condo in 2015. Holland testified on Day 2 of the trial.  More here, here and here.

JACOBSON, STEPHEN: A contractor who performed work on five of Manafort’s properties billing him over $3 million and paid through international wire transfers. Associated with SP&C Home Improvements (Vendor A). Jacobson testified on Day 2 of the trial.

KATZMAN, MAXIMILLIAN: With his father Alan, operated a high-end, imported menswear boutique in NYC named Alan Couture. The store has since closed its doors. Testified on Day 2 of the trial, noting that Manafort was one of the top five buyers at their pricey shop, buying suits, sportscoats and outerwear. Likely Vendor E in the indictment. More here.

LAPORTA, CINDY: an employee with Kositzka, Wicks and Company (KWC), based in Alexandria VA, Manafort’s accounting firm. One of the five witnesses granted immunity. More here.

LISS, PAULA: An individual by this name is a resident of East Hampton, NY (The Hamptons); may be Vendor A, F, K or N in the indictment, which all have addresses in The Hamptons.

MAXWELL, JOEL: Owner and chief operating officer for Big Picture Solutions, Inc. of Jupiter, Florida. Vendor B on the Manafort indictment. Maxwell testified on Day 3 of the trial. He noted that Manafort paid over $2 million for audio-video installations, mostly via funds wired from Cyprus bank accounts. More here and here.

METZLER, AMANDA: Described as an in-house bookkeeper for Paul Manafort until 2011.

MIKUSKA, MATTHEW: An FBI agent who participated on the warranted raid on Manafort’s home. Mikusa testified on Day 2 of the trial, identifying documents found during the raid, including mortgage loan documents signed by Manafort.

O’BRIEN, CONOR: a CPA with Kositzka, Wicks and Company (KWC), based in Alexandria VA, Manafort’s accounting firm. One of the five witnesses granted immunity. More here.

OPSUT, DANIEL: Comptroller with Mercedes-Benz of Alexandria VA. Manafort is accused of laundering money via the purchase of a Mercedes. Opsut testified on Day 2 of the trial. Vendor O on the government exhibit list. More here.

RABIN, DANIEL: A political analyst and former employee of Manafort and Tad Devine during their work in the Ukraine. Possibly associated with commercial leasing activity at Rabin Management Company, located in Mill Valley CA.  D. Raiban is included in a number of emails in the government evidence list. Rabin testified on Day 2 of the trial. More here.

RAICO, DENNIS: Formerly with the Federal Savings Bank in Chicago, which loaned Manafort $16 million for real estate. Raico is copied on numerous email chains on the evidence list. One of the five witnesses granted immunity. More here and here.

REGOLIZIO, MICHAEL: President of New Leaf Landscape Maintenance LLC, with locations in The Hamptons. Vendor F in the indictment. Regolizio testified on Day 3 of the trial. He stated that Manafort paid through international wire transfers. He also confirmed fake invoices. More here.

SEFERIAN, GARY: A loan officer with Banc of California in Santa Ana. BuzzFeed News reported that two accounts opened by Manafort and Jeffrey Yohai, his former son-in-law, were forcibly closed by Banc of California because of suspicious activity. The bank filed a Suspicious Activity Report (SAR) with the Financial Crimes unit of the Treasury Department.  More here and here.

TRUSKO, ALEX: A former employee of Davis Manafort Partners, and a current employee of Steam Mountain, LLC, a business operated by Manafort, Trusko led the FBI to a storage locker in Alexandria, VA containing a trove of Manafort business documents. More here here and here.

WASHKUHN, HEATHER: Longtime bookkeeper for Manafort; handled all his personal and professional financial dealings from 2011 to 2018, according to CNN. Washkuhn testified on Day 3 of the trial. She confirmed falsified profit and loss statements that Manafort submitted to three banks, fake invoices and stated that Rick Gates repeatedly asked her to change financial statements to show more income, and asked for statements that could be edited. 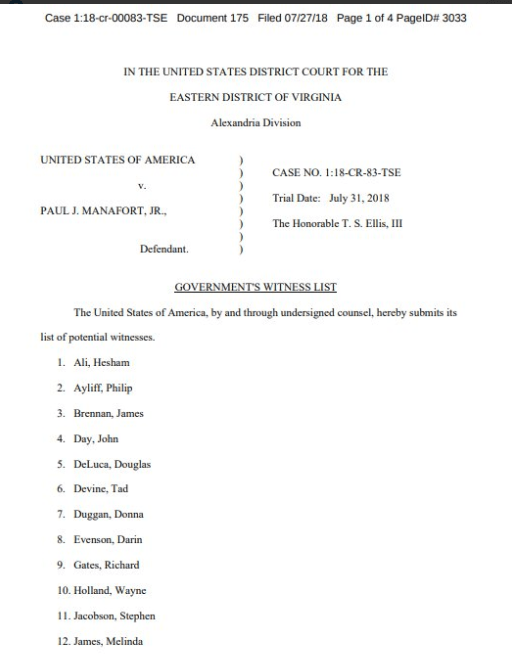 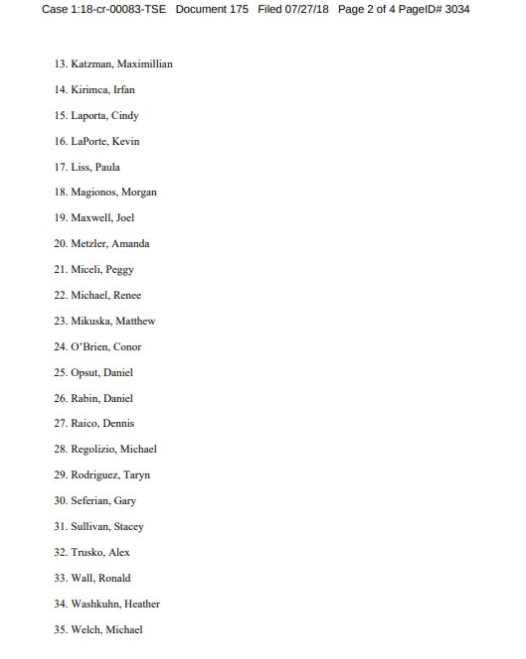