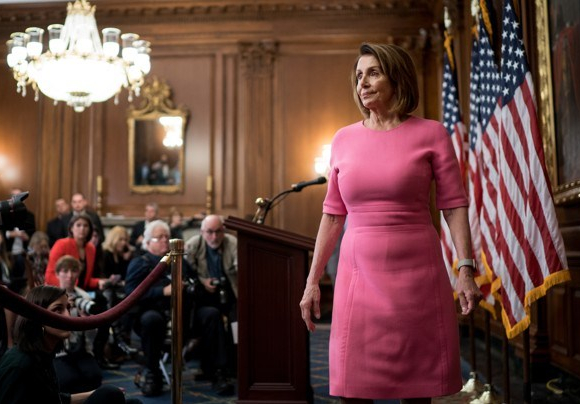 Watch out! The propaganda will be profuse. Bottom line: the endorsements by the current occupant of the White House were bombs. Judging by his many shout-out tweets and home state visits to specific candidates – Trump’s Vote-for-Me rhetoric was powerless. His loyalists lost to Democrats.

Top among them: Rep. Dana Rohrabacher (CA), Sen. Dean Heller (NV) and Rep. Brat (VA). Also noteworthy: a whopping fifteen states elected a Democrat for their governor – and both the Georgia and Florida races are not yet determined but leaning Blue. Likewise Jeff Flake’s Arizona Senate seat may very well flip Blue as Rep. Kyrsten Sinema’s lead over Martha McSally surged to 28,000 votes in a count that is 88 percent complete.

What it all means:

That’s not all. The impulses of the current occupant of the White House to demand legislation from his GOP co-conspirators are a thing of the past. And State Houses across the nation can address the inequities of the voting systems enacted by their Republican predecessors.

We the People might witness a real infrastructure week. We could see a revitalization of clean air standards, the imposition of sanctions against our real national enemies and rational trade accords with our friends.

So much is possible when our government operates in its ordained constitutional role, and not as the prize of an autocrat.

Speaking of which, here are a handful of fruitless tweets by the failing White House tenant. Thankfully, his bluster and braggadocio repelled many among us.

Bob Hugin, successful all of his life, would be a Great Senator from New Jersey. He has my complete and total Endorsement! Get out and Vote for Bob.

Fantastic #MAGARally🇺🇸in West Virginia, thank you. Everyone get out and VOTE for Patrick @MorriseyWV and @CarolMillerWV!

New York, get out and VOTE for @JohnFasoNy, a great and hardworking Congressman. We need John’s voice in D.C. His opponent just moved to the area – is Pro-Iran and Anti-Israel. Vote for John. Has my Strong Endorsement!

Arizona is such a Great State but it needs Border Security which @MarthaMcSally will provide, and Krysten Sinema doesn’t even think about. If it were up to Sinema – drugs, crime and illegal traffic will be flowing into Arizona at an ever increasing pace. Vote for Martha!

VOTES STILL BEING COUNTED Between Martha McSally and Krysten Sinema.

….Lake Okeechobee and all of the hurricane money were a passion for Rick Scott, who called endlessly on behalf of the People of Florida. Vote @ScottforFlorida!

Thank you Macon, Georgia! Get out on Tuesday, November 6th and VOTE for @BrianKempGA as your next Governor to protect your jobs, defend your borders, fight for your values, and continue MAKING AMERICA GREAT AGAIN! https://t.co/Hzbqw35oNM

TOO CLOSE TO CALL Between Stacey Abrams and Brian Kemp.

I need @claudiatenney of #NY22 to be re-elected in order to get our big plans moving. Her opponent would be a disaster. Nobody works harder than Claudia, and she is a producer. I look forward to working together with her – she has my Strongest Endorsement! Vote Claudia!

.@DebbieStabenow voted against Tax Cuts, great Healthcare, Supreme Court Justices and all of the many things the people of Michigan wanted and need. She is an automatic far left vote, controlled by her bosses. John James can be a truly great Senator!

Dana Rohrabacher has been a great Congressman for his District and for the people of Cal. He works hard and is respected by all – he produces! Dems are desperate to replace Dana by spending vast sums to elect a super liberal who is weak on Crime and bad for our Military & Vets!

.@DannyTarkanian is a great guy and a team player. He will represent his District, State and Country at the highest level. Danny is strong on Military, our Vets, Second Amendment and all of the things that we so strongly stand for. Vote for Danny – he has my Strong Endorsement!

Congressman @RodBlum of Iowa got a desperately needed Flood Wall for Cedar Rapids that was almost impossible to get. He makes a BIG difference for Iowa! Border, Military, Vets etc. We need Rod in D.C. He has my Strong Endorsement!

Congressman @DaveBratVA7th is a fighter who is doing a great job for Virginia and for our Country. Border, Military, Vets, 2nd Amendment and all else. We need Dave in D.C. He has my Strong Endorsement!

.@Erik_Paulsen, @Jason2CD, @JimHagedornMN and @PeteStauber love our Country and the Great State of Minnesota. They are winners and always get the job done. We need them all in Congress for #MAGA. Border, Military, Vets, 2nd A. Go Vote Minnesota. They have my Strong Endorsement!

Congressman @KevinYoder has fought hard for the People of Kansas. Highly respected, strong on Crime, the Border, Military, Vets and Second Amendment. Kevin has my Total Endorsement!

.@WalkerStapleton will be an extraordinary Governor for the State of Colorado. He is strong, smart, and has been successful at everything he has ever done….